Sound must seem an echo to the Sense! 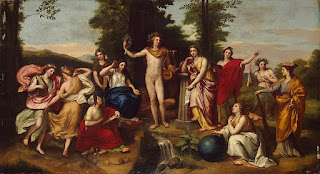 The poetry of Alexander Pope (1688-1744) is sometimes associated with a cramped 'classical' approach to the imagination. However, rhythmic life and energy are bound up in Pope's rhyming couplets. He has an ear for music and movement. In fact, he often speaks about dance or employs its as a metaphor. Rhythm and dance provide a rich vein of physicality. Like Dryden, Pope perfected his ability to hear the inherent musicality of words and their sinewy rhythmic potential. He is a master of the soft rhapsodic cadences of lyric and elegy as much as the harsh, rough music of snarling satire.

Although many of Pope's poems present formidable challenges to modern readers it eill eb apparent that a judicious selection of extracts will repay close reading and recitation. Students should also attempt to write their own couplets as this creative process will enable them to understand the levels of subtlety and complexity that can be achieved.

Alexander Pope's Essay on Criticism (1711) was written in 1709 when he was 21. His poem discussed the balance between nature and art; creativity and criticism; freedom and regularity.

Influences: Boileau's Art Poétique (1674) and the French critics, Rapin and Le Bossu; Latin verse-essays of Horace, Vida, and two minor Restoration writers, the Earls of Mulgrave and Roscommon. Also borrows form the classical Roman writer, Quintilian. As the final line of this extract on the role of sound qualities and versification also demonstrates, the poet and critic John Dryden was also an inspiration for Pope.

As elsewhere in the poem, Pope practises what he preaches; he explains by doing. In order to grasp his sense of how sound functions in poetry, all we have to do is read the poem aloud. Notice how variously he employs the effects of vowels and consonants.

The common sense notion that sound supports the sense (meaning/ideas) is brilliantly demonstrated as a happy union or balance between the two aspects of poetry. Pope shows us examples of the tedious and repetitive uses of sounds, which he contrasts with more inspiring models of agility and lively expression.


An Essay on Criticism

But most by Numbers judge a Poet's Song,
And smooth or rough, with them, is right or wrong;
In the bright Muse tho' thousand Charms conspire,
Her Voice is all these tuneful Fools admire,
Who haunt Parnassus but to please their Ear,
Not mend their Minds; as some to Church repair,
Not for the Doctrine, but the Musick there.
These Equal Syllables alone require,
Tho' oft the Ear the open Vowels tire,
While Expletives their feeble Aid do join,
And ten low Words oft creep in one dull Line,
While they ring round the same unvary'd Chimes,
With sure Returns of still expected Rhymes.
Where-e'er you find the cooling Western Breeze,
In the next Line, it whispers thro' the Trees;
If Chrystal Streams with pleasing Murmurs creep,
The Reader's threaten'd (not in vain) with Sleep.
Then, at the last, and only Couplet fraught
With some unmeaning Thing they call a Thought,
A needless Alexandrine ends the Song,
That like a wounded Snake, drags its slow length along.
Leave such to tune their own dull Rhimes, and know
What's roundly smooth, or languishingly slow;
And praise the Easie Vigor of a Line,
Where Denham's Strength, and Waller's Sweetness join.
True Ease in Writing comes from Art, not Chance,
As those move easiest who have learn'd to dance,
'Tis not enough no Harshness gives Offence,
The Sound must seem an Eccho to the Sense.
Soft is the Strain when Zephyr gently blows,
And the smooth Stream in smoother Numbers flows;
But when loud Surges lash the sounding Shore,
The hoarse, rough Verse shou'd like the Torrent roar.
When Ajax strives, some Rocks' vast Weight to throw,
The Line too labours, and the Words move slow;
Not so, when swift Camilla scours the Plain,
Flies o'er th'unbending Corn, and skims along the Main.
Hear how Timotheus' vary'd Lays surprize,
And bid Alternate Passions fall and rise!
While, at each Change, the Son of Lybian Jove
Now burns with Glory, and then melts with Love;
Now his fierce Eyes with sparkling Fury glow;
Now Sighs steal out, and Tears begin to flow:
Persians and Greeks like Turns of Nature found,
And the World's Victor stood subdu'd by Sound!
The Pow'rs of Musick all our Hearts allow;
And what Timotheus was, is Dryden now.

In The Art of Love, the Roman poet Ovid provides some tips (for women) on the cultivation of voice and the power of song (poetry):

Sirens, though monsters of the stormy main,
Can ships when under sail with songs detain:
Scarce could Ulysses by his friends be bound,
When first he listen’d to the charming sound.
Singing insinuates: learn all ye maids;
Oft when a face forbids, a voice persuades:
Whether on theatres loud strains we hear,
Or in Ruelles some soft Egyptian air,
Well shall she sing of whom I make my choice,
And with her lute accompany her voice.
The Rocks were stirr’d, and beasts to listen stay’d
When on his lyre melodious Orpheus play’d,
Ev’n Cerberus and hell that sound obey’d.
And stones officious were, thy walls to raise,
O Thebes, attracted by Amphion’s lays.
The Dolphin, dumb itself, thy voice admir’d,
And was, Arion, by the songs inspir’d,
Of sweet Callimachus the works rehearse,
And read Phileras’ and Anacreon’s verse;
Terentian plays may much thy mind improve,
But softest Sappho best instructs to love.
Propertius, Gallus, and Tibullus read,
And let Varronian verse to these succeed.