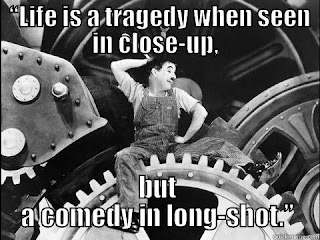 “Life is a tragedy when seen in close-up, but a comedy in long-shot.”
--- Charlie Chaplin.

"Dramatic comedy, from which fictional comedy is mainly descended, has been remarkably tenacious of its structural principles and character types."
(Northrop Frye, Anatomy of Criticism)

"The days of Comedy are gone, alas!

When Congreve's fool could vie with Moliere's bete:
Society is smooth'd to that excess,
That manners hardly differ more than dress."
--- Byron

"Man is the merriest species of the creation, all above and below him are serious."
--- Addison
“This world is a comedy to those that think, a tragedy to those that feel.”
--- Horace Walpole.

“Comedy is simply a funny way of being serious.”
--- Peter Ustinov

“The duty of comedy is to correct men by amusing them.”
--- Moliere.

"In the hands of a comic genius the pretence of stupidity is the triumph of irony."

"In my mind, there is nothing so illiberal, and so ill-bred, as audible laughter."
--- Philip Stanhope, 4th Earl of Chesterfield. 9 March 1748.

"For your race, in its poverty, has unquestionably one really effective weapon—laughter. Power, Money, Persuasion, Supplication, Persecution—these can lift at a colossal humbug,—push it a little—crowd it a little—weaken it a little, century by century: but only Laughter can blow it to rags and atoms at a blast. Against the assault of Laughter nothing can stand."
---  Satan, in Mark Twain's "The Chronicle of Young Satan"

“As the purpose of comedy is to correct the vices of men, I see no reason why anyone should be exempt.”
--- Moliere.

“The most difficult character in comedy is that of the fool, and he must be no simpleton that plays that part.”
--- Miguel de Cervantes.

"The principle of the humor is the principle that unincremental repetition, the literary imitation of ritual bondage, is funny. In a tragedy - Oedipus Tyrannus is the stock example - repetition leads logically to catastrophe. Repetition overdone or not going anywhere belongs to comedy, for laughter is partly a reflex, and like other reflexes it can be conditioned by a simple repeated pattern." (Northrop Frye, Anatomy of Criticism)

"Whoever undertakes to set himself up as a judge of Truth and Knowledge is shipwrecked by the laughter of the gods."
--- Albert Einstein


“One always writes comedy at the moment of deepest hysteria.”
--- V. S. Naipaul.

“In tragedy every moment is eternity; in comedy, eternity is a moment.”
--- Christopher Fry.

“Humor is properly the exponent of low things; that which first renders them poetical to the mind. The man of Humor sees common life, even mean life, under the new light of sportfulness and love; whatever has existence has a charm for him. Humor has justly been regarded as the finest perfection of poetic genius. He who wants it, be his other gifts what they may, has only half a mind; an eye for what is above him, not for what is about him or below him.”
--- Thomas Carlyle, in 'Schiller" (1831) 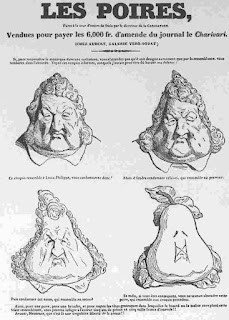 “It is not funny that anything else should fall down, only that a man should fall down ... Why do we laugh? Because it is a gravely religious matter: it is the Fall of Man. Only man can be absurd: for only man can be dignified.”
--- G. K. Chesterton, "Spiritualism", in All Things Considered (1908)

“The more one suffers, the more, I believe, has one a sense for the comic. It is only by the deepest suffering that one acquires true authority in the use of the comic, an authority which by one word transforms as by magic the reasonable creature one calls man into a caricature.”
--- Søren Kierkegaard, in Stages on Life's Way (1845)

"Laughter, while it lasts, slackens and unbraces the mind, weakens the faculties, and causes a kind of remissness and dissolution in all the powers of the soul; and thus far it may be looked upon as a weakness in the composition of human nature."
--- Addison

Parody is critical intelligence in humorous mode.
“A serious and good philosophical work could be written consisting entirely of jokes.”
--- Ludwig Wittgenstein, as quoted in "A View from the Asylum"

“Comedy is an escape, not from truth but from despair; a narrow escape into faith.”
--- Christopher Fry

“The perception of the comic is a tie of sympathy with other men, a pledge of sanity, and a protection from those perverse tendencies and gloomy insanities in which fine intellects sometimes lose themselves. A rogue alive to the ludicrous is still convertible. If that sense is lost, his fellow-men can do little for him.”
--- Ralph Waldo Emerso

“Comedy naturally wears itself out -- destroys the very food on which it lives; and by constantly and successfully exposing the follies and weaknesses of mankind to ridicule, in the end leaves itself nothing worth laughing at.”
--- William Hazlitt

"Everything human is pathetic. The secret source of humour is not joy but sorrow. There is no humour in Heaven."
--- Mark Twain


‘Laughter, while it lasts, slackens and unbraces the mind, weakens the faculties, and causes a kind of remissness and dissolution in all the powers of the soul; and thus far it may be looked upon as a weakness in the composition of human nature. But if we consider the frequent reliefs we receive from it, and how often it breaks the gloom which is apt to depress the mind and damp our spirits, with transient unexpected gleams of joy, one would take care not to grow too wise for so great a pleasure of life.’
--- Addison

“A man's got to take a lot of punishment to write a really funny book.”
--- Ernest Hemingway.


"The onset is sudden, with attacks of laughing and crying lasting for a few minutes to a few hours, followed by a respite and then a recurrence. The attack is accompanied by restlessness and on occasions violence when restraint is attempted. The patient may say that things are moving around in the head and that she fears that someone is running after her. The examination is notable for the absence of abnormal physical signs. No fever was detected, although some reported that they had had fever after a few days. The only abnormalities found were in the central nervous system. The pupils were frequently more dilated than controls, but always reacted to light. The tendon reflexes in the lower limbs were frequently exaggerated. There were no tremors or fits or losses of consciousness. The neck was not stiff."
--- Rankin, A.M. & Philip, P.J. (1963). An epidemic of laughing in the Bukoba district of Tanganyika. Central African Medical Journal, 9, 167–170.

“A pleasant comedy, which paints the manners of the age, and exposes a faithful picture of nature, is a durable work, and is transmitted to the latest posterity. But a system, whether physical or metaphysical, commonly owes its success to its novelty; and is no sooner canvassed with impartiality than its weakness is discovered.”
--- David Hume

“The comic spirit is given to us in order that we may analyze, weigh, and clarify things in us which nettle us, or which we are outgrowing, or trying to reshape.”
---Thornton Wilder.

“Lord, what fools these mortals be!”
--- William Shakespeare, A Midsummer Night's Dream.

“The comic and the tragic lie close together, inseparable, like light and shadow.”
--- Socrates.

"If we may believe our logicians, man is distinguished from all other creatures by the faculty of laughter. He has a heart capable of mirth, and naturally disposed to it. "
--- Joseph Addison

"Laughter relieves us of superfluous energy, which, if it remained unused, might become negative, that is, poison. Laughter is the antidote. "
--- George Gurdjieff

"In the vain laughter of folly wisdom hears half its applause."
--- George Eliot

"But whoever gives birth to useless children, what would you say of him except that he has bred sorrows for himself, and furnishes laughter for his enemies."
--- Sophocles

"The sound of laughter is like the vaulted dome of a temple of happiness."
---  Milan Kundera


“Humor is the great thing, the saving thing. The minute it crops up, all our irritations and resentments slip away and a sunny spirit takes their place.”
---  Mark Twain (1835 - 1910)

Dr Ian McCormick is the author of The Art of Connection: the Social Life of Sentences
(2013) Also available on Kindle, or to download.

Also worth a look: The PhD Roadmap: A Guide to Successful Submission of your Dissertation / Thesis.