City Scenes, Or, A Peep Into London


COME, peep at London's famous town,
Nor need you travel there;
For one foot up, and one foot down,
In future, you may spare:
At home, a hundred miles away,
'Tis easy now to look,
At City Scenes, and London gay,
In this my little book.
(“Introduction”)

I've recently been examining a wide range of sketches, illustrations, scenes and caricatures from the eighteenth and nineteenth century. I'm particularly interested in the inter-connections between visualised text and the 'reading' of images. I'm also interested in how other senses are called upon to suggest the smell, feel and touch of the writings and depictions.

There is also the deconstructive question concerning the image/text relationship. To what extent does the one silence, screen, or block out the other? Does the book as supplement to a real jounrey engage with an imagined journey that supplants the life of the city in order to project on to it the ideological messages of the authors?

Furthermore, do text(s) and image(s) creatively interact, perhaps throwing mutual light on each other? In a still more complex ambiguous way, there are the wider interactions between groups of texts/images within the same book.

A still wider scope might also focus on the field of vision, perhaps taking in a comparison/contrast with, for example,  Blake's poems and texts. Indeed, some of the sections of Ann Taylor and Jane Taylor's City Scenes, Or, A Peep Into London, for Good Children (1809) work in a range of moods and modes, invoking pathos or surprise, distaste and admiration. I'm also thinking that the complex sensorium of Christina Rossetti's Goblin Market might be relevant here.


A selection of extracts is printed below.

Now this old gentleman has found a treasure; some rare and valuable book, for which he had been hunting at every book-stall in London for these twenty years; and here it is at last! worm-eaten through and through, to be sure, but then, as there is not another copy in England, he does not care. For my part, though I would not be disrespectful to an old gentleman, I cannot help thinking, that a good new book, upon some useful subject, would be more valuable; and where the pleasure can be, of having a thing merely because nobody else can get it, I cannot tell.


Two ladies have just entered one of these fine shops, to make purchases. There go five guineas for a morning dress, which the lady owns she does not want, only it is so pretty, and so cheap, that she must have it.


O lady! do not squander such a sum upon useless finery, while there is one starving fellow-creature within your reach.

As this poor man was at his work, he fell from a high scaffolding and broke three of his ribs. It is quite as much as a working 'man can do to live and support his family, in health, in these hard times; but how is he to bear a long illness, to pay nurses and doctors' bills, while work is standing still, and no wages coming in? All these thoughts rushed into poor Master Chip's mind, the moment he came to his senses; and gave him more pain than even his smarting wound; while the cries and lamentations of his wife increased his agony. A gentleman passing by and enquiring the cause of the bustle, recommended them to apply to Bartholomew's Hospital; and the poor man was immediately conveyed there on a litter. The hospitable gates flew open to receive the stranger; and he was put into a comfortable bed, where his bones were set by a skillful surgeon, and he is now in a fair way for recovery. He feels truly thankful for the benefit he has received, and hopes he shall always remember with gratitude, a charity which has probably saved himself from death, and his wife and children from want and misery.

What a dismal place!—However, it may do us good for once, to see such a wretched sight. Let us wait at the door, and observe them. See this poor mechanic and his starving family. His hands are so benumbed with cold, that he can scarcely grind his rusty tools. His wife and children seem stupefied with cold and hunger; they sit motionless, and appear given up to despair. There is not a spark left in the grate, and the last morsel of bread has been devoured.
Let us step in and offer them some relief; and whenever, in future, we may feel inclined to murmur and fret at the little losses and crosses we happen to meet with, let us remember this unhappy family, compare our comfortable dwellings with this miserable garret, and learn to be grateful and.content. 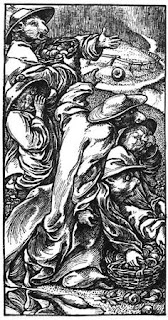 with grotesque illustrations by Laurence Housman (1893)

Laugh’d every goblin
When they spied her peeping:
Came towards her hobbling,
Flying, running, leaping,
Puffing and blowing,
Chuckling, clapping, crowing,
Clucking and gobbling,
Mopping and mowing,
Full of airs and graces,
Pulling wry faces,
Demure grimaces,
Cat-like and rat-like,
Ratel- and wombat-like,
Snail-paced in a hurry,
Parrot-voiced and whistler,
Helter skelter, hurry skurry,
Chattering like magpies,
Fluttering like pigeons,
Gliding like fishes,—
Hugg’d her and kiss’d her:
Squeez’d and caress’d her:
Stretch’d up their dishes,
Panniers, and plates:
“Look at our apples
Russet and dun,
Bob at our cherries,
Bite at our peaches,
Citrons and dates,
Grapes for the asking,
Pears red with basking
Out in the sun,
Plums on their twigs;
Pluck them and suck them,
Pomegranates, figs.”—

“Good folk,” said Lizzie,
Mindful of Jeanie:
“Give me much and many: —
Held out her apron,
Toss’d them her penny.
“Nay, take a seat with us,
Honour and eat with us,”
They answer’d grinning:
“Our feast is but beginning.
Night yet is early,
Warm and dew-pearly,
Wakeful and starry:
Such fruits as these
No man can carry:
Half their bloom would fly,
Half their dew would dry,
Half their flavour would pass by.
Sit down and feast with us,
Be welcome guest with us,
Cheer you and rest with us.”— 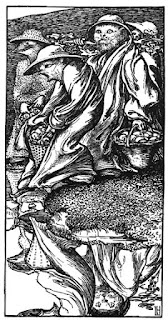 Posted by Dr Ian McCormick at 15:17 No comments: 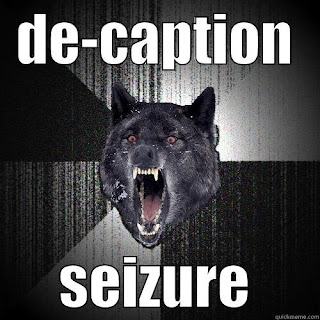 Discriminate. A companion to "don't." a manual for guidance in the use of correct words and phrases in ordinary speech, (New York: 1891.) instructed its readers

Discriminate in the use of CAPTION and HEADING. It is a perversion of the word caption
to use it in the sense of heading, although this is frequently done in the United States.
Caption means seizure or act of taking, and not headship. Don't say, “The caption of a
chapter, section, or page”; use heading. (p. 22)

In his Dictionary of Americanisms: a glossary of words and phrases, usually regarded as peculiar to the United States (1848), John Russell Bartlett explained

Caption, this legal term is used in the newspapers where an Englishman would say title, head, or heading.

On the other hand ... Merriam-Webster's Dictionary of English Usage (1995) noted

You will find few of them who object to December being used for the twelfth month, when its Latin root means 'ten,' or to manure being used as a noun meaning 'to work (land) by hand.' So when you read, for example, that caption must refer to matter above a picture because it comes from Latin caput 'head,' keep manure in mind."

In one sense there is a battle between the linguistic prescriptivists who privilege the origin of a word (etymology) in an attempt to fix its true meaning, over a description of its current usage which might be quite different from its original use, so far as that use can be traced in texts that have survived the ravages of time.

Moving on to a philosophical perspective, in his book Thinking from A to Z (Routledge 1998), Nigel Warburton provides a lucid account of the etymological fallacy, while also admitted that words bear 'vestiges' of their past use:


‘Those who have spent many years perfecting their knowledge of ancient languages find the etymological fallacy extremely tempting and frequently succumb to it. Nevertheless etymology should only be used when it is genuinely illuminating. The trouble with it is that the meanings of words often do preserve vestiges of their original meanings.’

In terms of social media, images that do or do not bear captions are open to the play of being newly captioned, or re-captioned. The new caption, or comment, then participates in the flow of commentary, so the real-time meaning is both presenting and postponing. Does this mean that the caption is no longer a form of image seizure? Have images lost their legal entitlement? Have they been de-capitated in being captioned?

(This is starting to feel like a vertiginous whirlwind of deconstruction. I'm reminded that Derrida has been charged with merely employing the etymological fallacy ...)

But perhaps also the caption is pro-vocation; it is a call for action, for research, for critique, where image, text, and commentary, engender critical combinations and creative collisions within the spaces that they open and close. De- and/or re-territorialization of the nomadic caption? 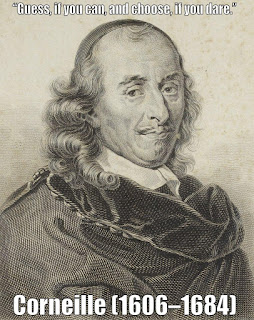 Posted by Dr Ian McCormick at 12:44 No comments: