The Encyclopedia of the Gothic - Review 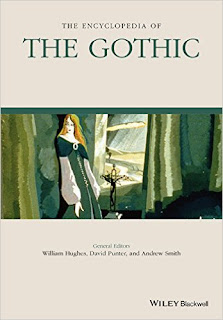 The general editors (William Hughes, David Punter and Andrew Smith) begin their Introduction to The Encyclopedia of the Gothic by employing the now well-known story of the Chinese encyclopedia, popularized by Jorge Luis Borges and by Michel Foucault in The Order of Things (1970). Although they choose to employ the definite article in their chosen title, their enlightened emphasis on ‘provisionality’ hints at the struggle with the ‘epistemologically firm structure of an encyclopedia’ (p. xxxiv). Indeed, the evidence of diversity and the proliferation of resources [FN1] on gothic appears to challenge the possibility of constructing an encyclopedia in fixed media. Fortunately, the online version will provide an opportunity to interact with the suggestions of readers in order to cope with ‘an ever evolving genre’ (p. xxxviii). Nonetheless, the print version marks an excellent opportunity to take stock of the current state of play in gothic studies and to critically survey this gargantuan domain of academic research.

In one sense, it might be proposed that academic canonicity originates in the authority and the legitimacy of scholars recruited to the project. In addition to the esteemed general editors the reviewer counted some 40 professors amongst the 131 contributors writing on 244 topics. It is also reassuring for the health of the subject that many early career scholars have joined forces with the influential writers who have been transforming the theoretical directions of Gothic studies since the 1980s.

In short, it’s a highly impressive and monumental effort of collaborative scholarship. I do not envy the task of the editors who must bear the burden of their judiciousness: what to include, what to exclude. Digging deeper reveals that there are underlying narratives and a sense of shared assumptions about the Gothic project and approaches to reflecting on the diverse phenomena conceptually and theoretically.  Given that the gothic genre is not confined to a canon of literary texts the critical project is all the more arduous and the monster of possibility spreads out in all directions. Gothic has become a global project, national and transnational in its replication and migration. As if nodding to the academic industry that has fuelled the dissemination of gothic the editors kindly offer an entry at the centre of their encyclopedia around which all other entries circulate: the International Gothic Association (IGA), whose inaugural conference was held at the University of East Anglia in 1991. Incidentally, two of the general editors, Andrew Smith and William Hughes, are co-presidents of the International Gothic Association, and the latter is also the founding editor of Gothic Studies, the refereed journal of the International Gothic Association.

It is rather impertinent to question whether a book of this kind is really needed when so much is already available elsewhere, and more material than ever is available on open access. Indeed, the IGA website (www.iga.stir.ac.uk) is a useful place to start. Google Scholar throws up 442,000 references to ‘gothic’ so it’s undoubtedly very helpful to have some guidance to refine the search terms. Certainly this volume compares well with a range of other histories, guides, and companions that have been designed to cater for the undergraduate market. It’s obviously also a safe place to start for students who want to research a specific topic, or to improve their awareness of key themes, concepts, and theoretical approaches. The editors have managed to meet the need for accessibility without falling into the trap of a gross over-simplification of complex ideas. Entries range in length from a thousand words, up to five thousand for ‘period’ surveys. The general policy of the editors has been to offer a survey of the gothic field that covers ‘periods, places, people and media.’ (p. xxxvii) Short bibliographies accompany each entry, together with cross-references. A well-constructed traditional index also helped this reviewer to track down more minor topics that I had deemed to have been missed out.

The notion of transnationalism and the migration of Gothic tropes and narratives is evidently becoming more urgent as a focus for international scholarship and collaboration. In this regard David Punter’s entry on ‘Theory’ notes: ‘it involves the constant contact, now prevalent more than ever before because of the globalized spread of cultural interchange, between Western textualities and “indigeneous” folktales and related material.’ (692) Undoubtedly the traffic is multi-dimensional and therefore the encyclopedic projects of a Western intelligentsia and the habits of cultural consumers need to be constantly alerted to the notion of the key role of ‘provisionality’ and ‘interaction’ previously noted.

Psychoanalytic and other theoretical approaches to Gothic are well served in this volume, perhaps revealing the interest of the general editors and the academic readership that the book targets. Taking a lead from Dale Townshend’s The orders of Gothic: Foucault, Lacan and the subject of Gothic writing, 1764-1806 (2007) David Punter’s entry on ‘Theory’ notes that theory ‘does not have to bifurcate into, on the one hand, purely historical study and, on the other, an attempt to demonstrate “universal” aspects.’ (692)

Curiously, the entry on Future Gothic (Nema Montezero) appears without any References or Further Reading. Is that the Shape of Things to Come? Media topics are represented by entries on popular TV, Film (Stephen Carver), Games (Tanya Krzywinska); Radio (Richard  J. Hand), and many more. The longest entries (up to five thousand words) in The Encyclopedia of the Gothic tend to be devoted to the surveys of periods and movements. These entries provide a convenient route for students who are embarking on the study of the gothic for the first time and who need a judicious summary rather than an awesome monograph. Given the high cost of downloading academic articles, it is evident that a modest investment in a resource such as The Encyclopedia of the Gothic clearly represents excellent value for undergraduates, independent scholars and general readers. The theoretical approaches will also prove an essential resource for those seeking to engage with current academic research on the gothic.

Posted by Dr Ian McCormick at 17:07 No comments: